The Blue Water Bridge is an international bridge across the St. Clair River. This toll bridge makes up half of the second busiest crossing point between the US and Canada. These bridges are jointly owned and maintained by the governments of the US and Canada. This crossing consists of two bridges. The bridge in the background was built in 1938 and the newer bridge (foreground) was added in 1997 to handle increased traffic.

During the construction, two temporary masts were erected to assist in the construction of the tied arch; the towers were painted red and lighted, enabling them to be seen from afar. The approaches to the new bridge use box girders, compared to the original which hold up the road deck with trusses.

Midwest Steel was very proud to be selected to be the structural steel contractor of the Canadian side of the newer bridge. Some interesting facts about this important bridge project include: 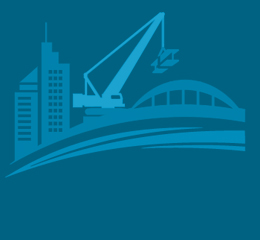 Coming soon
Expertise You Can Count On

We have four decades of diverse experience managing complex projects. Contact us today to discuss the details of your project.